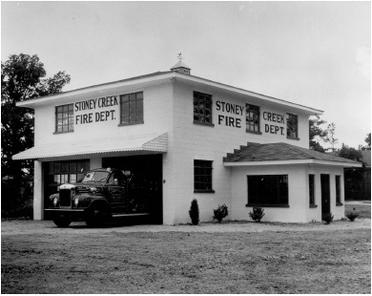 In the fall of 1955, Bucky Overton was with his father Buck at Overton's Barbeque as he happened to look out the back window. The sky to the North was lit up as if it were daylight about a mile away. Looking across the woods and Stoney Creek, it looked like it was their house on fire. Terrified, Buck got in the car and rushed home. As he got closer he realized it was not their home, but the old Daniels home, only a quarter mile from his house. The house was unoccupied, but somehow caught fire. The home burned completely to the ground and the lot remains empty to this day. Bucky said that he could remember his daddy saying it took Battleboro 20 minutes to get there and Nashville 30 minutes to respond. These were the only two organized departments in the County at the time.

Thus, the idea of a volunteer fire department in Rocky Mount began. Locals, neighbors and friends were contacted. Men like Earl Pittman, Ralph Williams, Ed Stallings, Dee Currin, Millard Bailey, Henry Johnson, Al Dickens, James Moss, and countless others set to work turning this idea into reality. As with any great idea, there were numerous behind the scene preparations to be made. There were endless fundraising efforts including the countless barbecue suppers at Benvenue School cafeteria and the Conway Twitty and Loretta Lynn concert held at Northern Nash High School. The "early volunteers" were the good ole' boys who were genuinely concerned for the safety, life and property of their friends and neighbors. As the plan continued to take shape, the need for a meeting place and storage for the mounting number of fire-fighting equipment grew as well.

A location off of Benvenue Road was found. Earl Pittman and Ralph Williams donated half of the blocks to the cause and Stony Creek purchased the other half. Foots Taylor laid the block for the firehouse in 1956.

Few even remember the dispute over the name. Stoney vs. Stony. It seems that Mr. Hyman Battle (owner of Rocky Mount Mills) offered to build the building with one stipulation: The name be "corrected" to STONY. Wanting to maintain the history and in reference to the nearby creek, the name stayed STONEY until years later.

Back then, there were no hydrants along the county roads and we had to carry our own water to a fire. This was done with a water truck (wagon) that was named ANNABELLA. It was a two-ton Chevrolet truck with a 2000 gallon tank used to refill the fire truck.

The members wives had also become involved because the elusive idea had taken on a life of it's own and "if you can't beat "em", join "em". So fittingly, ANNABELLA also became the name of the ladies auxillary.

After the building was built, came the duty of sleeping at the fire house at least once a month. This way, the community was afforded the luxury and protection to go to sleep at night in safety.

Stony Creek's first Rescue Truck was a Civil Defense Truck. This was during the time when nuclear devastation and safety drills were accepted as parts of daily life, much like Homeland Security is today. This was about the time that our introduction into he ambulance service began. In the past, funeral homes were in the business of picking you up from a wreck and transporting you to the hospital or calling the coroner. Through it all, we were still the volunteer organization that was called out all times of the night to serve the community and it's citizens. As time passed the fire Department and ambulance service grew into Stony Creek Fire and Rescue.

In the early 1970s, we were faced with the problem of relocating our station due to the building of the new Highway 64 By-Pass. We found a new location on Country Club Road and a new building was constructed. We moved into our new location in 1975 and remain there today.

In 1980, eighteen of our rescue personnel took an EMT IV course and all of them passed. They started using up to date procedures and administering IV's in the field in December of 1980.

By 1981, Stony Creek had five ambulances, four pieces of fire equipment and one rescue truck. Over the years Stony Creek's ambulance service expanded to three locations; one in Whitakers, one between Rocky Mount and Sharpsburg, and the main station on Country Club Road.

We operated this way until August of 1994 when Stony Creek ceased it's Fire Department operations due to the growth and expansion of the city limits of Rocky Mount. Stony Creek continued to operate it's ambulance service and rescue squad until 2006, when Nash County consolidated all EMS operations under it's authority. This change can be looked at in two ways; sadness and anger that an institution filled with pride and integrity has been pushed aside or anticipation and hopefulness for a bigger, better institution in the future.


The origins of this organization center around values that are all too often missing today: to look after your neighbor and to take care of one another. Those that took the time and care to start such a valuable service in the beginning are mostly gone but their genuine love for the department and the integrity of the institution instilled by the founding members is alive and well in many community supporters.

On Dec. 31, 2021 Stony Creek Rescue stopped operations. From 1956 to 2021, we provided primary rescue services to citizens in the city of Rocky Mount, NC on the Nash County side as well as a good portion of the Eastern side of Nash County. We also provided back-up EMS services for Nash County at paramedic level.

Stony Creek was always more than just a fire department in the eyes of the community.